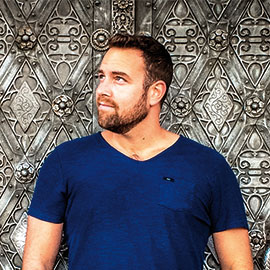 Arean is meditating for some years already, but his practice really became a more vital part of his lifestyle after attending his first Winter Youth Retreat in 2015/2016.

Within the organization he is involved in arranging transport and decoration during the retreats, (social) media and event planning.

Arean was born and raised close to Amersfoort in The Netherlands, but considers himself more to be a global villager, being pulled by the richness and diversity of global cultures. He studied International Development Management, and seeks opportunities to work abroad working with grass-root projects to improve the livelihood and social conditions of vulnerable groups.

His dream is to eventually embrace a life of grace and simplicity in nature by starting or joining an (eco-village) community, and getting involved with community living, permaculture gardening, natural building, renewable energy systems and meditation and yoga programs.

Other things he likes to do in his spare time are connecting with friends for good talks, cooking, discovering music, dancing, hiking, basketball, hanging out in the gym, doing creative things like painting and DIY projects, playing with photo & video, eventually mastering the Spanish language as well as brushing up on his German.

“Working for Young Sita Meditation is a labour of love and an utmost joy; it’s so beautiful to see the alive faces and hear the alive tales of participants that attended the program, where they express their precious personal experience, just like I had in 2015 when I came for the first time and was blown away by this amazing community. I feel privileged that I can actually work with people I can call dear friends. That’s absolutely brilliant.”